The Ford Model T launched in 1908 had just one dashboard instrument: an ammeter. With a top speed of just 45mph, even a speedometer was optional. Dashboards have come a long way since then, and the rate of progress is accelerating.

In this article, we offer some insights into the future of the digital cockpit, how head-up displays and transparent surfaces may change the way people interact with their cars, and some challenges automakers will face in integrating all these displays into one holistic user experience.

Before we begin: what are dashboards in cars?

Quite simply, A car dashboard is a control panel usually located directly ahead of a vehicle's driver, displaying instrumentation and controls for the vehicle's operation. Modern digital dashboards will also contain infotainment information, too, including things like maps, music and temperature control.

A brief history of car dashboards

Just as the telephones of 1908 have morphed into the all-singing smartphone of today, dashboards in cars have gone from serving a single purpose – operating the car – to become multifunctional. Single-purpose ‘steam gauges’ have given way to multipurpose displays.

As technology evolved, the dashboard became a way to improve the entire experience of driving. More information could be relayed to the driver, and dial after dial was added to allow drivers to make better decisions.

The first truly digital dashboard appeared in the late 1970s in the space-age Aston Martin Lagonda. Three screens replaced traditional instruments including the speedometer and tachometer.

Since the Lagonda, screens have proliferated in cars. Manufacturers explore different sizes, formats and configurations. For example, the Tesla comes with an ‘iPad-like’ infotainment unit in the center console, and a digital display behind the wheel for everything about the car itself.

Other forward-thinking car companies are exploring different combinations of physical screens and head-up displays. The number, location and format of screens will only continue to grow in future. Starting with the windshield, car companies are turning other surfaces into digital displays. But that’s only the beginning. Some concept cars have dozens of different screens.

Fighter pilots need to keep their eyes out of the cockpit. Time spent looking at instruments is time not spent looking for the enemy. The solution is a head-up display. Developed in the 1960s, they became common in military aircraft during the 1970s.

In 1988, the Oldsmobile Cutlass Supreme became the first production car with a head-up display. By 2024, the automotive head-up display market is expected to grow by 24 percent.

Head-up displays aren’t just about space efficiency and improving user experience. They also aim to improve driver safety. According to Erie Insurance, analysts studied more than 172,000 fatal car crashes across a five-year period and found that one in 10 involved at least one distracted driver.

Mobile phones are distracting, and infotainment units can be as well. They pull the driver’s eye away from the road and into the car, making it easier to miss hazards such as pedestrians. This is especially true if these devices are poorly designed, slow to respond, or unintuitive to use.

Eyes on the road

“From our perspective, the whole reason for HUDs is to help with driver distraction,” explains Barry Hoch, general manager of product planning for Audi America. “You reduce the tilting of the head by 20 degrees, which is what’s required to look at an instrument cluster. And you don’t need to refocus back on the road.”

A head-up display means a driver can retain focus on the road while receiving the relevant information they need to optimize the driving experience. They can see their speed, their direction of travel, turn-by-turn navigation directions, and their fuel status, all without glancing away from the road.

The future of head-up displays

While head-up displays are already becoming commonplace, there is a fine line between distracting a driver and presenting relevant information. As a consequence, today’s HUDs display only simple graphics and limited data.

“If a head-up display can warn of a collision or a grade crossing ahead and a train coming, that may actually help,” explains Deborah Hersman, President of the Independent National Safety Council and former chairwoman of the National Transportation Safety Board. “But if it puts up an iPod playlist or sends a restaurant reservation, that may distract from the task of driving.”

As vehicles become less reliant on drivers’ attention and as autonomous technologies become more sophisticated, head-up display are sure to play a larger role. However, it will be quite a long time before fully autonomous cars are available to the public, as there are many technical complexities to solve.

While HUDs might be limited in what data can be presented, car manufacturers can turn other surfaces inside the vehicle into displays as well. For example, they can turn opaque surfaces transparent.

Every car has a collection of blind spots. The A pillars, for example, block a driver’s vision when turning left and right, while the B pillars limit vision while changing lanes.

The car of the future may use digital displays to make these blind spots disappear, increasing visibility in a vehicle. Continental, for example, prototyped this concept using high-resolution OLED displays and fish-eye cameras to capture and display the 10 to 30 degrees needed to fill in the vision gap on the A pillar.

Land Rover also prototyped this idea, developing a “transparent hood” that allowed the driver to see what rocks and boulders they were driving over while off-roading.

In theory, the vehicle of the future could provide 100 percent visibility for the driver by digitally displaying everything a driver can’t see, all without losing the safety benefit of the pillars which soften an impact should a car roll over in a crash.

A digital canvas for cars

Until the driver is not required to interpret road hazards at all times, the role of a HUD will likely remain focused on safety-critical information.

However, safety and visibility aren’t the only argument in favor of digitizing more surfaces inside the vehicle. With more screens, cars can show more personalized information around the vehicle.

To some extent this is already happening. For example, car mirrors often come with LED lights that warn drivers about vehicles in their blind spots. Side-view and rear-view mirrors are being augmented with cameras and displays. Manufacturers are also exploring how to use dimming side windows as touchscreens.

The future is a combination of traditional displays in the dashboard and other strategically placed screens, as well as head-up and other see-through displays. All these screens promise to turn car interiors into a sweeping canvas that blends safety and driving information with entertainment, navigation, and views of the outside world.

A vision of the future

We have come a long way from the Model T Ford, and there is no doubt that innovation at the high end of the market will trickle down. An Aston Martin Lagonda may have cost more than a house in 1976, but it’s hard to imagine any modern car coming off the production line today without at least one digital screen in it.

While this vision of a mosaic of displays will give car makers a chance to differentiate themselves, it also presents challenges. Again, Aston Martin was a pioneer, but not in a good way: innovation didn’t come cheap. Rumor has it, the electronics cost four times as much to develop as the car itself. Despite the groundbreaking technology, the company only made 645 Lagondas.

To succeed in the new multi-screen world, carmakers need to find ways to develop the user experience for these screens in a faster and cheaper way than ever before. Carmakers need to become agile designers in the digital domain as well as the engineering world. They need the right tools to design the best digital experiences in the most efficient way.

The right tools for the job

Developing a harmonized look-and-feel across a cockpit filled with multiple displays requires a cross-platform HMI toolkit allowing a high level of reuse and alignment across UI projects.

Kanzi UI is a design and development software tool used by major automakers in production programs around the globe to create distinctive, brand-reinforcing digital user interfaces.

For a truly seamless user experience, designers must also be able to share data and content effortlessly across all the screens in the vehicle. UX designers need tools that allow them to treat all the displays in a car as one extended canvas and all the underlying data and content as a palette of services to visualize wherever and however they wish. Kanzi Connect, a connectivity software tool that integrates directly into Kanzi UI, allows just this.

As services are integrated into a Kanzi Connect server instead of the UI directly, a digital cockpit built with the Kanzi Reference HMI can easily be extended to include more platforms, driving more displays.

In complex environments such as multi-screen digital cockpits, design for safety is paramount. The ideal process starts with rapid prototyping early in the project and continues with quick design iteration as work shifts from the lab to target hardware.

With the right automotive-grade HMI tools from start to finish, designers can create a truly satisfying user experience while still putting safety first.

Our Kanzi product family is based on designer empowerment, rapid prototyping, workflow efficiency, and cross-platform support. Our Kanzi Services team of design and engineering experts is focused exclusively on the unique automotive environment, solving complex challenges in new use cases and transforming design into software.

To find out more about what we do, read our blog, or contact us here to discuss how we can help you. 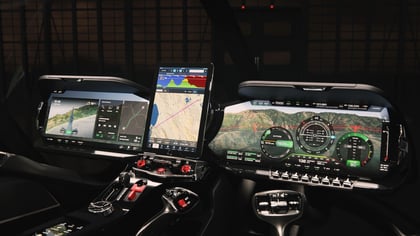