Automakers continue to add more rich visuals to digital displays on the dashboards and center stacks of their vehicles. Developing those visuals, which consumers often expect to be on par with their smartphones or video games, can be a long and challenging process. But real-time 3D graphics that can render things like traffic scenes with multiple cars are making development faster and easier while offering the designer greater flexibility in the final outcome.

By Ville Kolppo. Ville is presenting at the WardsAuto User Experience Conference Oct. 1 in Novi, MI.

In real-time 3D, the details of a three-dimensional scene are calculated so quickly on a graphics chip, and sent so frequently to the display, as to deliver an apparently smooth animation. Real-time 3D rendering is not a new concept: video game graphics have been rendered in real-time for decades. Today, however, it is becoming a critical factor in automotive user interface (UI) design.

The Adobe Graphics Design Team has listed 3D design at the top of its list of most impactful graphic design trends in 2019, calling it the “new sheriff in town.” Expect to see more real-time 3D adapted in automotive digital UI development cycles.

As the auto industry moved from classic physical gauges, which were often simple but beautifully designed elements on the instrument panel, to digital gauges, designers were deeply concerned that the panel would look flat. As a result, digital designers used shading and textures in 2D renderings to try to create a 3D-like appearance – also known as skeuomorph design – to provide visual depth. The resulting 2.5D graphics – construction of a three-dimensional environment from two-dimensional projections – looked realistic but provided no new information. Furthermore, it became time-consuming and cumbersome to make design changes.

A recent positive development is the trend towards flatter design, rejecting non-functional embellishments. As designers break from traditional conventions, such as how an analog gauge should be replicated, they can focus on conveying the most relevant information in the most effective way possible.

An elegant UI design with clean presentation of information and simple controls benefits from seamless integration of 3D elements. For example, an accurate model of a car can provide detailed error information and serve as an onboard interactive user manual. As sensors becomes more capable, traffic scenes with multiple cars can be rendered more realistically, giving the driver confidence in how the car sees its surroundings. Also, with real-time 3D rendering, maps can incorporate appropriate depth and realism, whether visualizing road conditions, navigation, or a self-parking maneuver.

Real-time 3D allows automotive designers to realize rich user interfaces without relying on pre-rendered image sequences for animations. Not only is it more cost-efficient than using fixed image sequences, it also speeds up the entire process. It is a tremendous advantage compared to drawing hundreds of renderings for each animation. Working with real-time 3D allows designers to develop UI content and scenes that can easily be modified, even very late in the design cycle.

This design capability and flexibility offered by real-time 3D also opens doors to developing content-driven UIs. For example, the UI can interact with the vehicle’s advanced driver-assistance system (ADAS) cameras or sensors to show the true relative location of passing vehicles or the lane lines ahead of the vehicle. It can also render maps using the most up-to-date map data and even real-time environmental conditions.

Although real-time 3D provides UX designers with flexibility and room for greater creativity, it poses a risk of putting too much content on the vehicle screens. However, the application paradigm from the smartphones is now coming to the automotive UI. Modern consumer electronics are beautifully designed, placing graphics on high-quality displays that complement the physical design of the product.

Seeing animation and clean moving graphics coming out of a pure black background exudes quality. Combining the frame of a clean UI with simple but elegant graphics is where the magic happens. That visual impact and focused contrast is easily lost with excessive content and decoration. Every element should have a purpose, especially in automotive UIs where safety is critical.

With drivers still a critical part of the vehicle equation – we’re still many years away from fully autonomous vehicles in any significant volume – it’s important to provide a user experience which increases safety. The goal is “focused usability,” achieved by only presenting information relevant at the time and by rendering a 3D scene which responds to the environmental context.

We haven’t yet seen the perfect HMI, but tools such as real-time 3D graphics enable UX designers to focus on what matters most.

Ville Kolppo is the Design Director at Rightware, the leading provider of HMI software and connectivity technology that enable a branded user experience in connected cars. Ville joined Rightware in 2012 and is in responsible for design services within the Kanzi Professional Services team. 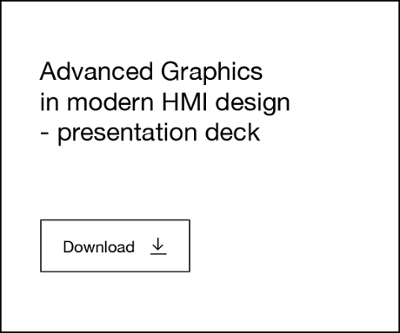